I have many occurances on camera, one witnessed by another and some EVPs. Where they come from I don't know. I'm not a ghost hunter just possible a something else.


On Jan. 29, my pastor came by to give me communion and while she was here, she blessed the house before communion.

I went to the TV and was trying to pull up her sermons on Youtube and the moment I click on my pastor's channel, the internet and phone line died.


No one has said exactly what caused the outage but the tree have been iced over during this time. So have ice of the line?

I guess the Lord ran the ghost out the phone line and the power of God was so strong it blew out the communication in multiple rural towns.

Well it looks like the ghost is gone. I've been haunted by the holy ghost. Psalms 91:11, the angels look over you.

Check back to see what else happens.

Ghost Comm is a result of witnessing a ghost sighting on Sept. 29, 2013 between 12:03am, 00:09:29 hours and 12:15 am. The date and time is a palindrome which read the same backwards as forward. The poltergeist EVP or poltergeist EPP, electronic poltergeist phenomenon, was dash dot dash dot dot dot dot dot dash in Morse code and 101 000 001 in binary code as seen in the poster blow. The binary code translates to 321 which is associated with the ancient Hebrew alphabet shin, kaf, alef and when these letters are overlaid onto the star of david it creates the Xx and Xy chromosomes as seen in the poster below.
Sept. 29, is archangel feast day and through this ghost sighting I found out I was born on archangel Gabriel's day is messenger of God. 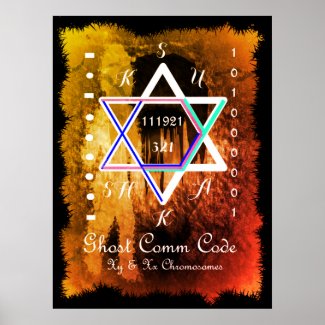 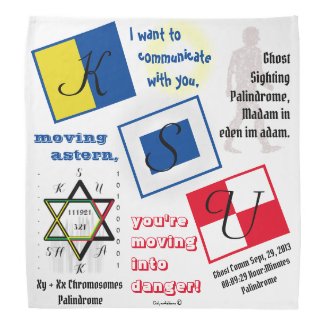